Balmain is proud to announce ‘The Together Project,’ a unique new initiative from Balmain and its longtime partner (RED). Intent on celebrating universal stories of love, intimacy and friendship, ‘The Together Project’ focuses on the relationships between different artists and the people who are most important to them –lovers, parents, family, best friends.

For the debut exhibition from ‘The Together Project,’ Balmain and (RED) have turned to Evangelia Kranioti, a Greek director and visual artist based in France. Kranioti is known for her critically acclaimed works in film, photography and installations, which have won numerous awards. Recent Kranioti projects have been showcased in Les Rencontres d’Arles, the Biennale of Moving Images, Le Palais de Tokyo, the Berlinale Forum and ParisPhoto.

For this first edition of ‘The Together Project,’ displayed inside the Balmain stand during this year’s Paris Photo (November 11-14), Evangelia Kranioti has created ‘Together.’ 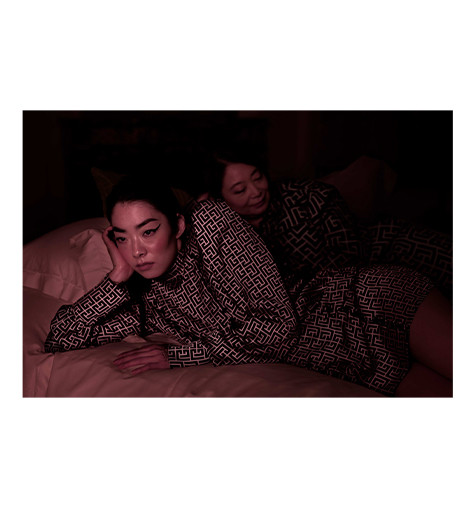 For the exhibition, Kranioti has photographed and filmed an eclectic mix of subjects: the Japanese-British songwriter and model Rina Sawayama and her mother Noriko, the choreographer and acrobat Yoann Bourgeois and his wife Marie Bourgeois, and the adult film star and entertainer Allannah Starr.

The films record the subjects’ most intimate musings on the beauty of affection and intimacy—while adding more poignant and sometimes darker reflections on fears, tragedies, disease, rejection and fragility. Kranioti has chosen to set the subjects in bed as it is an intimate space where people are often most vulnerable yet connected to their self and companion.

Proceeds from the sale of those limited-edition images will be dedicated to (RED), helping that organization raise needed money for The Global Funds’ essential work in fighting AIDS and COVID in sub-Saharan Africa.

How to support the project?

The Together Project artworks will be available directly from the link below and on site at Paris Photo. A percentage of the sales will be donated to (RED).

About The Together Project

The Together Project is a unique initiative from Balmain and its longtime partner (RED), celebrating the beauty of relationships between artists and someone they treasure—a lover, parent, best friend–while exploring stories of love, intimacy and friendship. These universal stories, it is hoped, might help inspire a new generation to find common ground with vulnerable communities that are hardest hit by AIDS. Each year, The Together Project will give carte blanche to an esteemed artist, with the goal of having each new series of creations help us to understand a little better the many ways for people to come together.

Evangelia Kraniotiis a Greek director and visual artist based in France, working in film, photography and installations. Her projects are regularly showcased internationally, in venues such as Les Rencontres d’Arles, the Biennale of Moving Images, Le Palais de Tokyo and ParisPhoto among others. Her first films have both premiered at the Berlinale to critical acclaim (Exotica, Erotica, Etc. Berlinale Forum 2015, Obscuro Barroco Berlinale Panorama 2018 / TEDDY Jury Award), and have received numerous awards, including four Iris awards from the Hellenic Film Academy. Evangelia Kranioti is the 2019 recipient of the prestigious Madame Figaro Women in Motion Prize attributed at a woman photographer in Les Rencontres de la Photographie of Arles.