HOW YA GONNA KEEP ‘EM DOWNON THE FARM?

The 1919 vaudeville hit, “How Ya Going To Keep ‘Em Down OnThe Farm After They’ve Seen Paree?,” may be simple, silly, and with a title that is way too long—but at its core, it holds one enduring truth: the lure of Paris is sometimes too strong to be resisted. For this premiere episode of l’Atelier Balmain, we explore the paths of two provincials—Pierre Balmain, from Saint Jean de Maurienne in the French Alps, and Olivier Rousteing, from Bordeaux in the southwest of France—who were both drawn to the French Capital as young men, with both eventually rising to oversee the collections at Balmain, as they transformed themselves into true Parisians.

Maurice Balmain, born in 1884, was from a well-off family in Saint Jean de Maurienne. He and his Pierre’s mother, Françoise, loved theatre and they often acted in plays with local troupes. It was their chests of costumes that Pierre Balmain relied upon when he would pull together other young friends and students into his many plays. Maurice Balmain died young, leaving behind many debts—something that forced his widow, Françoise, to join her two sisters at work in the local dress shop, Les Galeries Parisiennes. Paris and fashion seem destined to play a big part in Pierre Balmain’s life, from a very early age.

Pierre Balmain’s hometown of Saint Jean de Maurienne is a small village, perched high amid the mountains of Savoy. Savoy is the remote and beautiful Alpine region of France, set on the border of Switzerland and Italy. Pierre Balmain’s family name, as he liked to point out, underlined his family’s deep connection to the area in a very unique way. A local legend has it that centuries ago, villagers rescued a young boy, found unconscious high in the neighboring mountains. After they brought him back to St Jean and revived him, he couldn’t manage to remember either his name or from where he came. So, since they had found him on the nearby Mount Balm, the villagers decided to name him Balmain, after the mountain.

Pierre Balmain’s mother, Françoise Balmain, (born Françoise Ballinari in 1894), was of French and Italian ancestry, with her father coming from Ticino, the nearby Italian-speaking region of Switzerland. As Olivier Rousteing notes, Madame Balmain seems to have been a very stylish woman and she seems to have relished pushing every single button in her conservative little town of St Jean de Maurienne. She was set on doing whatever it was that she wanted to do—for example, hiking up into the mountains to ski, long before it was acceptable for women to wear trousers—much less, ski! In addition, she set herself apart by always dressing in the latest Parisian fashions. 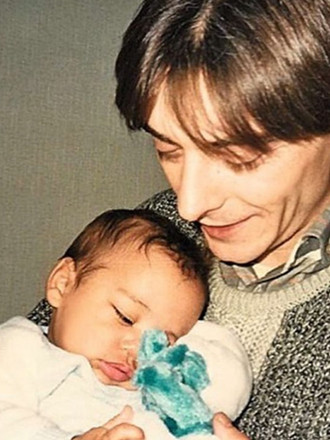 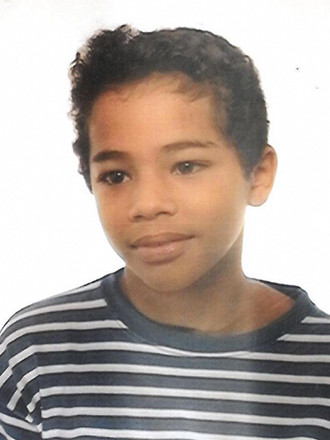 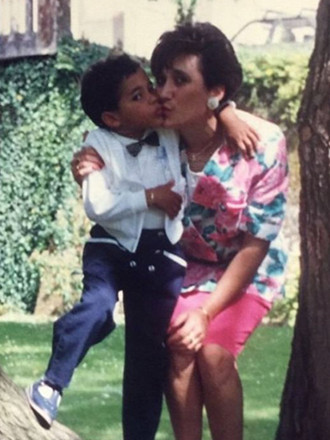 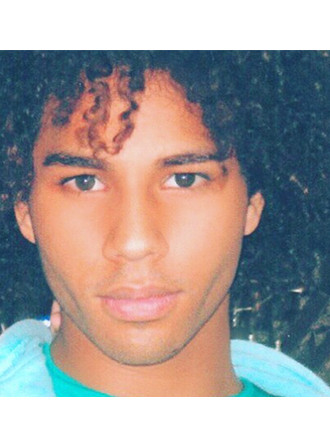 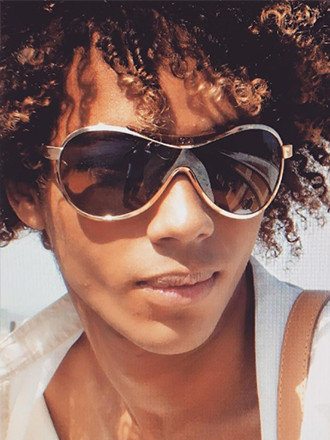 Olivier Rousteing was born in Bordeaux, in France’s Southwest, in 1985. From a very young age, he was determined—just like the young Pierre Balmain—to move to Paris and work in fashion.

THE FIRST SHOW AT THE PARIS OPERA

Olivier Rousteing remembers well the exact moment when he promised himself that he was going to move to Paris and create beautiful things. It happened when he was just ten years old and he was visiting the French capital for the first time, as part of a family vacation. On that trip’s last night, he and his parents had tickets for the Paris Opera. As he walked into Garnier’s masterpiece, Rousteing, like so many others before him, was awed by the incredible beauty of the building’s interior. When Olivier Rousteing decided to show his Spring 2018 collection in the Paris Opera, he sent a message back in time, writing a very personal letter addressed to the 10-year-old Olivier Rousteing—that young boy from Bordeaux who was visiting Paris for the first time, more than two decades earlier. In his note to his younger self, Rousteing recalled how he had been so blown away by Garnier’s dazzling interior—and how that overwhelming beauty had pushed him to begin dreaming of moving to the French capital and working there as a designer. And, as this video of Balmain’s Spring 2018 collection shows, it’s clear that Garnier’s gilded touch can definitely still impress.

Olivier Rousteing’s love of the beauty of Garnier’s Opera building only grew as he worked closely with the team at the Ballet de l’Opera de Paris to design the costumes for Sébastien Bertaud’s Renaissance. Bertaud’s piece pays tribute to the elegance, sophistication and opulence of the legendary Ecole de Danse Française—making it a natural fit for Balmain’s singular legacy of luxurious craftsmanship. Olivier Rousteing’s ballet designs, now part of the Opera’s collections, highlight both the acclaimed savoir-faire of the Balmain atelier and the recognizable modern style of the designer, with impressive golden and silver embellishments covering flesh-colored performance pieces and rhinestones and pearls embroidered directly onto bodysuits, tights and draped tees.

Pierre Balmain’s first job in fashion was working for Henry Edward Molyneux, a dashing British designer who was known to his friends and colleagues as “The Captain” due to his previous military career that had cost him the sight in one eye. When Balmain began working for him, Molyneux was at the peak of his success in Paris fashion, dressing the major stars of the day, including Greta Garbo, Marlene Dietrich and Vivien Leigh. As Balmain explains in his memoirs, the most important thing that he learned at Molyneux was to avoid anything that could be described as “superfluous.” Instead, Molyneaux drilled into him the importance of concentrating on the power and strength of construction and simplicity. Balmain learned from the master how to strip everything back to the essential and to say what needed to be said in as few words as possible. In couture, Molyneux stressed, there is nothing more difficult than designing a beautiful, simple dress.

Pierre Balmain managed to hold on to his position at Molyneaux even after he had been called up for his French army service in 1936. Since he was stationed in Paris, Balmain would simply go AWOL to go work at Molyneux. After his mandatory service ended, Balmain called up once again in 1939, after Germany had invaded Poland and World War II began. Balmain was sent back to his native Savoy to form part of France’s Alpine defenses. After France fell, Balmain relied on his family’s friendship with the local authorities to avoid the fate that so many other Frenchmen his age faced: being sent to Germany, to work as forced labor in support of the Nazi war machine.

Lucien Lelong, the head of the powerful trade council that set the standards, procedures and rules for the fashion industry, was determined to thwart the Nazi plans to relocate Paris’ fashion and textile houses to Germany. Such a move would have meant the loss of thousands of jobs in France, adding to the already considerable suffering in the country. Lelong drove from Paris to Savoy, to persuade Balmain to return to Paris and work for him. Balmain returned to the occupied French capital to work for Lelong’s couture house, working alongside another French designer, Christian Dior. Dior was a calming force, helping to calm tempers when Lelong and Balmain had their many arguments. Although Dior and Balmain had very different personalities, the two grew to become friends and allies and they would often talk about their dreams of opening their own couture houses—or perhaps even leaving Lelong together, to open a new Paris couture house, under their joint control.

Like so many others living under Nazi occupation, Pierre Balmain closely followed the news on the BBC, as the English radio reported the advances of the allies working their way across France after the success of the Normandy landings on June 6, 1944. In his memoirs, Pierre Balmain recalls being at a dinner with his friend, the designer Cristobal Balenciaga, at the moment when the Parisians heard that their city had been finally liberated. He writes about the incredible emotions that they all felt, as they heard the city below them erupt into the Marseillaise, as General Leclerc’s free-French forces finally began their entry into the city.

A new spirit of post-liberation optimism seems to have pushed Pierre Balmain to finally leave Lucien Lelong and establish his own fashion house. While helping a friend look for an apartment, he saw an aristocratic townhouse on the rue François 1er that had previously been requisitioned for Nazi soldiers. When he heard that the owners were planning to convert the spaces into commercial leases, Pierre Balmain made a life-changing decision right then and there: that space on 44 François Premier was destined to become the new atelier and showroom for his new fashion house— the house of Balmain. And that address was destined to continue as the location of Balmain’s iconic Parisian flagship throughout the house’s 75-year history.

HOW YA GONNA KEEP ‘EM DOWN ON THE FARM?

More than 100 years ago, way back in 1919, one of America’s biggest musical hits was a short little ditty with a very long title: How You Going To Keep Them Down On The Farm After They’ve Seen Paree? It was just a simple and very silly tune—but the truth is, it reflected some significant changes that were taking place in the country at that time, as well as an enduring truth that we can easily understand today.

World War I had just ended—and the costs of that war had been incredible. After all that pain and all that sacrifice, American popular culture seemed eager to turn the page, to quickly switch the focus to lighter and more carefree subjects. For example, instead of focusing on the soldiers’ suffering, this song focused on what the young men had seen over there—sights that many of them could never have imagined earlier. Paris, for example. The city was a complete contrast to what many of those young boys were used to. It was open. Exhilarating. Filled with beauty, inspiration and creativity. Seriously—how could anyone expect those young soldiers to be satisfied with returning to their past lives in small towns and isolated farms after having had an injection of the beauty, elegance and excitement of The City of Lights?

And all of us—immediately—we get it. The song title says it all. Really… How the hell do you think you’re going to keep them down on the farm after Paris? It’s an age-old, often-repeated question. And it’s definitely not only the Americans who have been asking it. Anybody who has ever visited the city can easily understand. Paris, with its famous avenues, impressive architecture and beautiful elegance, has held an almost magnetic attraction for centuries. And, perhaps most notably, it has always been a favorite destination of artists and other creative talents—those who often find it very tough to leave, once they realize just how inspiring the surroundings can be.