PLAY THE EPISODE 4 OF THE SECOND SEASON OF L'ATELIER BALMAIN

Olivier Rousteing:
“Of course, it is an amazing honor to work with the Paris Opera. There are few institutions that embody so well the essence of French culture and creativity. Designing for the rigors and techniques of classical dance was a new challenge for me and my team—but it one that we very much enjoyed facing. As someone who has always been fascinated by the beauty and power of dance, this project was a joy to work on, giving me the unique opportunity to learn from and share ideas with a group of incredibly talented artists and craftsmen for whom nothing seems to be impossible.” 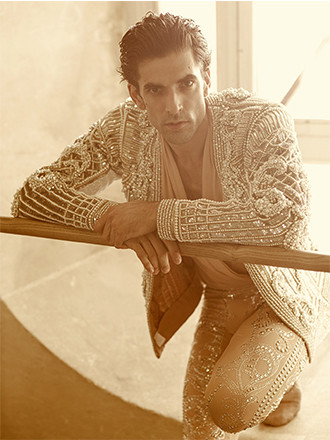 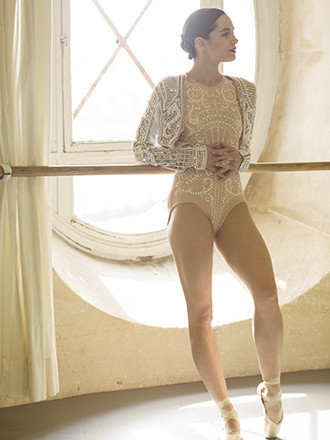 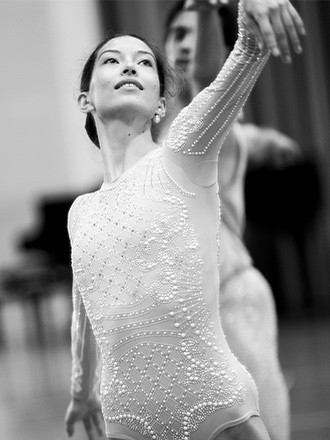 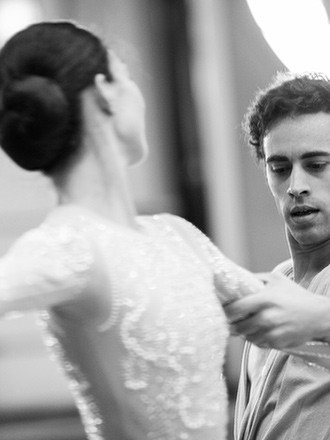 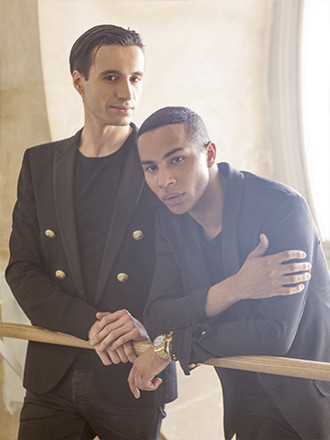 Credits: "Renaissance" was performed at Paris' Opera Garnier as part of the 350-year-old institution's celebration of emerging talents entitled Bertaud/Bouché/Paul/Valastro.

Olivier Rousteing:
“My Balmain team and I were extremely proud to be able to support the sixteen actors behind the extraordinary “Noire n’est pas mon métier” (“Being Black Is Not My Profession”) as they made their way up the red carpet-covered steps of the 2018 Cannes Film Festival.

I loved getting to know a little bit about these women through the compelling stories that they shared. It was their honesty and humor—as well as their strength and resilience—that struck me as I quickly turned each page of their book. Sadly, though, it was all too easy for me to recognize the inappropriate comments, ignorance and discrimination that they have all had to face during their careers.

Today, our beautifully diverse “Balmain Army” makes very clear that we proudly stand for inclusion and representation. In addition to being the right thing to do, Balmain also knows that it simply makes common sense to celebrate and reflect the power, talents and beauty of each and every member of the society where we actually live. I’m looking forward to the day when every fashion and entertainment company realizes that, as well.”

Olivier Rousteing:
“(RED)'s message hits close to home. Having begun my life in an orphanage, the struggles of vulnerable children across the globe is something that's very personal for me. Right now, there are over 15 million children worldwide who have lost a parent to AIDS. Most of those children live in Sub-Saharan Africa, where the disease is the largest killer of adults. The more I learn about (RED)'s impressive record of educating, empowering and protecting people through the Global Fund’s programs, the clearer it becomes for me that if we truly want to change this situation, we have the power to do just that. Every day, (RED)’s efforts help to ensure that fewer children lose their parents to AIDS and that fewer babies are born with HIV—which is why I am dedicated to doing anything that I can to help (RED) and its essential work.” 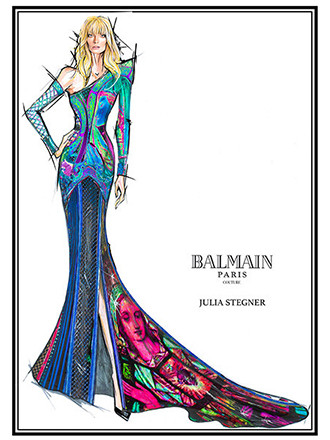 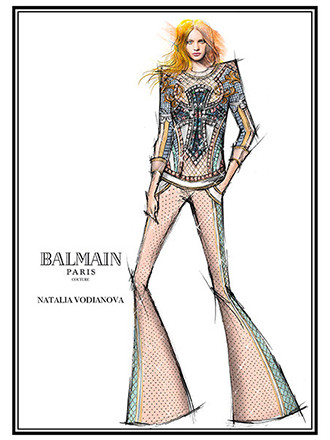 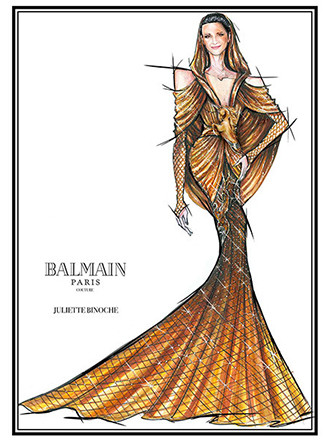 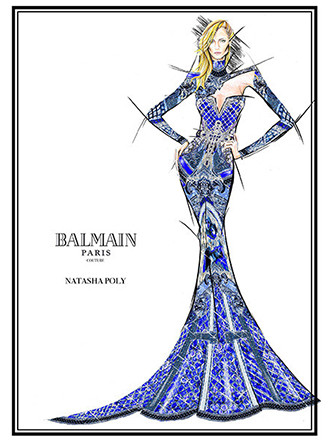 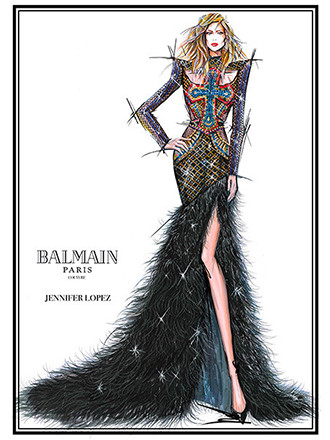 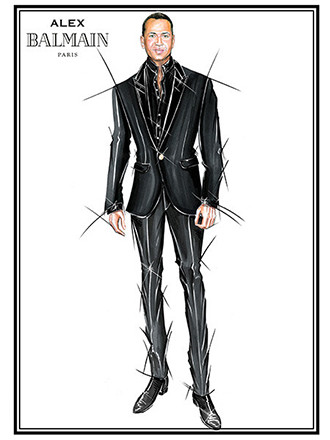 For the 2018 Met Ball, some important members of the « Balmain Army » literally agreed to give the clothes off their backs—in the hopes that they could help raise as much money as possible for the fight against AIDS. Olivier Rousteing and his team dreamt up a one-of-a-kind Balmain design for each of the stars seated at the Balmain’s Met Gala table : Jennifer Lopez, Juliette Binoche, Natalia Vodianova, Natasha Poly, Julia Stegner, Alex Rodriguez and Trevor Noah. And, after shining on the Met’s famous red carpet, each of those exceptional gowns and tuxedos was later auctioned off, with all proceeds going to support (RED) and The Global Fund’s fight to end AIDS.

In 2019, Olivier Rousteing’s dedication to music pushed him and his team to truly pump up the volume—to whole new level. They created a special Balmain moment that was as much concert as runway, presenting the house’s men’s collection during Paris’ annual joy-filled, all-night music celebration, la Fête de la Musique. Balmain constructed an impressive, ephemeral festival site inside the French capital’s beautiful Jardin des Plantes and the house’s models shared the enormous runway with fantastic performances from some of Rousteing’s favorite international artists. 1,500 free tickets were available to those who wanted to join in the festivities—and donations from those guests, as well as the proceeds from the sales of limited-edition Balmain festival merchandise and food and drink offerings were all donated to help (RED) and the Global Fund in their fight to end AIDS during our lifetime. Plans for a second festival in 2020 had to be scrapped due to health regulations during the recent pandemic, but Balmain promised that its 2021 Balmain Festival—again, in partnership with (RED)—would be even bigger and last for two days during Paris’ September fashion week.

Olivier Rousteing:
“Music and musicians are always important for Balmain—and they have been ever since the earliest days of the house, when Pierre Balmain was dressing the greatest performers of his era, including Juliette Greco, Dalida and the legendary Josephine Baker. During my ten years at the house, my team and I have seamlessly woven music and fashion together, season after season. Our second Balmain Festival built directly upon that distinctive house DNA, with some of my favorite performers joining our models on that special concert- meets-runway stage.

The house’s first festival, in 2019, helped bring our dedication to music, fashion and the fight against AIDS to a whole new level. We were all incredibly disappointed when pandemic realities forced us to cancel 2020’s festival—which explains our high-level of excitement leading up to the second festival, as we all looked forward to once again experiencing the beauty of friendship, the power of music and the excitement of Paris fashion week. And, of course, we took full advantage of that excitement to continue helping our long-time partner (RED) raise needed funds for the Global Fund to fight against two pandemics: AIDS and COVID.”

I think every one of us will forever remember 2020’s spring as being a dark one, marked by strange new fears and mandatory isolation. Even for those lucky enough to only have had to deal with Zoom frustrations and cabin fever, that confinement made very clear just how much we had taken for granted until that moment. Forced apart, we suddenly realized that we depended on being together. Locked inside, we longed for the beauty of the public spaces of our hometown, Paris. And, faced with the unending reports of unbelievable losses, we came to truly understand the transformative power of solidarity.

The following summer, finally reunited with friends (while continuing to practice social distancing!), we decided to celebrate returning to Paris, as well as that recent rediscovery of the strengths of those eternal values. While well aware that the pandemic’s danger remained very much with us, we were determined to look forward with hope and confidence in the changes and progress that we were certain lay just ahead of us.

And we knew that other struggles continued, as well. Renewed calls for justice and equality—heard on streets all across the world—were in reaction to that summer’s tragic losses, but their growing strength and force allowed us to dream of the possibilities of long-delayed changes, pushed forward by a newly energized and impressive mix of young, determined and diverse voices. Our dance drew inspiration from that shared longing for actual progress.

So, where was all that optimism in such a dark moment coming from? Perhaps it was a reflection of my own personal history—after all, it was not too long ago that someone like me was never meant to end up in the position that I occupy today.

Change can happen. Progress is possible.

I love that I work for a house that supports me and has joined with me in pushing for inclusion and changes from the very first day that I began working here. And I’ve always found it interesting that my own optimism in a better future is something that echoes the unusual legacy of Pierre Balmain. It was 75 years ago that our founder decided to take a risk during an uncertain time and open his eponymous couture house. What Monsieur Balmain and succeeding creative directors produced, decade after decade, was a key ingredient in the post-war renaissance of Parisian fashion. So, we were very happy to present a few of their incredible, intemporel designs on that beautiful summer evening.

I’ve had the great fortune to be chosen to build upon those foundations. So, I added to the mix a reflection of Balmain’s evolution over the last decade, concentrating on the tailoring in some of my key dress and jacket designs, with each demonstrating how the 21st-Century Balmain silhouette always channels the spirit of past masters.

Of course, the pathway of our peniche made clear to all the incredible beauty of our City of Lights. But Paris is so much more than its famous avenues, elegant bridges and iconic architecture. It’s the one-of-a-kind mix of refinement, freedom, diversity and creativity of today’s Ville Lumière that inspires me and my team as we work on our collections. Just like Pierre Balmain, we know that we could never separate this house from this city, which is truly the world’s fashion capital.

Our Balmain-Sur-Seine moment relied on many talents. In particular, I am very grateful to Andrew Makadsi, who worked closely with us to dream up the creative concept. After the incredible work he has done for my men’s shows, of course we asked Jean-Charles Jousni to choreograph that evening’s dance. We were also happy to have the same dancers that we relied on for our men’s shows return. And I could not possibly imagine a better pairing than the sublime voice of Yseult with those beautiful Parisian views.” 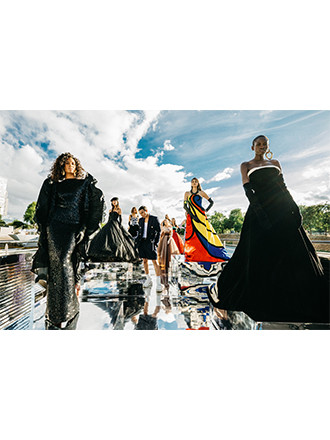 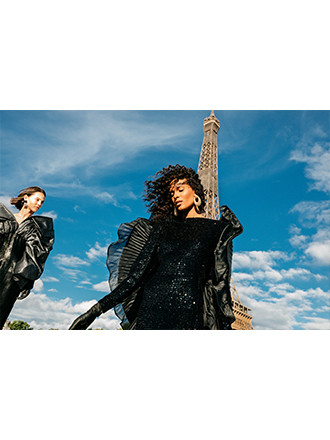 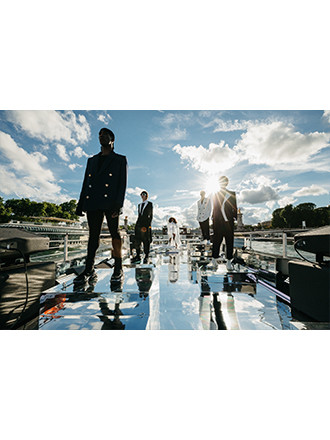 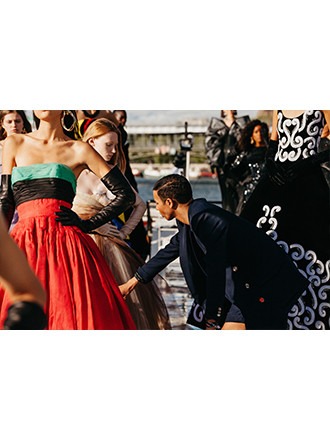 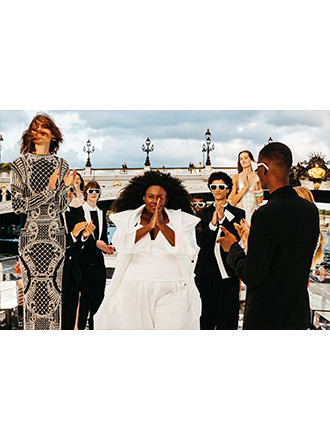 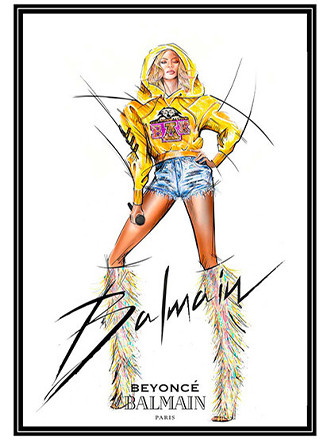 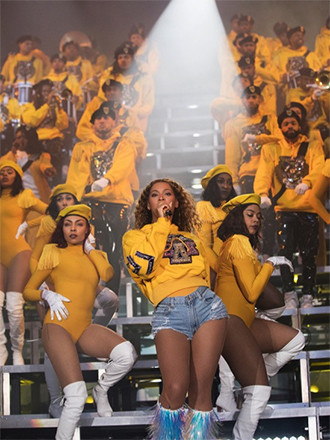 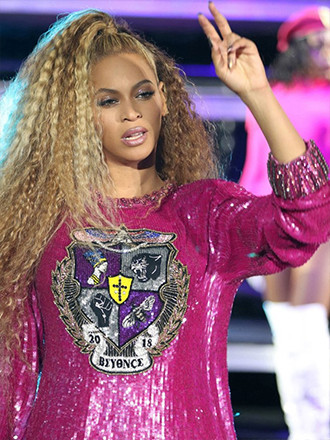 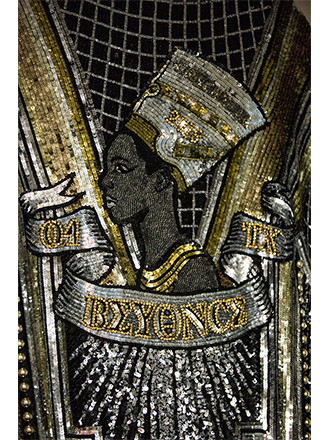 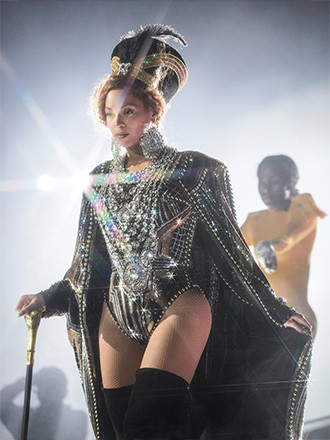 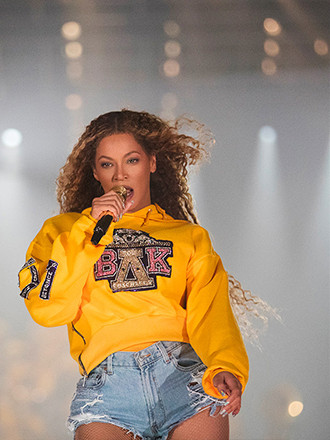 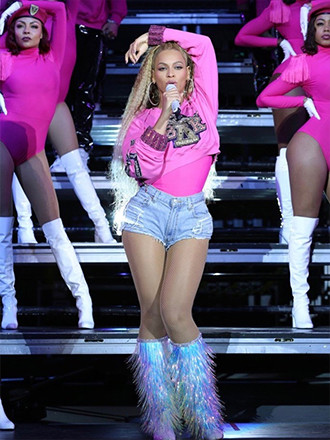 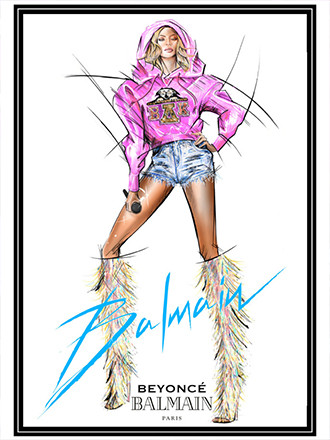 Olivier Rousteing:
“I met my match with Beyoncé.

Beyoncé, her stylist Marni and I worked closely together for several weeks to, yes, perfect this collaboration—and I loved every second of it. I will be forever grateful that I had this opportunity to briefly click off from collections and concentrate solely on how best to mix what I can offer with the amazing talent, drive and vision of Beyoncé. I doubt that I will ever I forget the joy of working with her and her team—or the awe I felt watching Beyoncé masterfully direct her on-stage troops or the beauty of listening to that extraordinary voice as she rehearsed.

I’m often asked how we choose our collaborations. Of course, we’re always looking for new ways to help the house grow and connect with as many members of the Balmain Army as possible. But, for me, personally? Above all, I search out new challenges. To have a chance to learn from the leading experts in a completely different field—be it tech, beauty or even classical ballet—helps me grow as a person and it also serves to push me and my team to develop new ways of thinking for future offerings. But teaming up with Beyoncé brought this learning process to a whole other level. She has a strong, personal vision and love for fashion—one which I found it to be very inspiring. To be able to work closely with a master like her to find the best way to bring couture to performance and music, was a stroke of luck—and left me with some amazing memories, which I will treasure for many years to come.”

Beyoncé:
“I’ve worn one-of-a-kind Balmains in arenas all across the globe, in videos shot inside the world’s finest museum and during some very important personal moments, as well—for example, last fall, when I cast my Texas ballot for change.

And—maybe you remember?—there were also two special weekends at Coachella...

At Coachella, we showed the world what’s possible when two perfectionists get together—yes, let’s remember, we are both Virgos!

My team, your team, you, me—we worked like mad to make every one of those hundreds of looks exactly right for those special concerts, those special weekends.