This is my most personal presentation to date. Today, we’re marking my tenth anniversary as Balmain’s Creative Director. It’s a role that I stepped into when I was just a kid, (oh my god, just 25 years old!), way back in 2011. And it has been a responsibility that has controlled every moment of my life for the past decade—but, obviously, I wouldn’t have had it any other way. 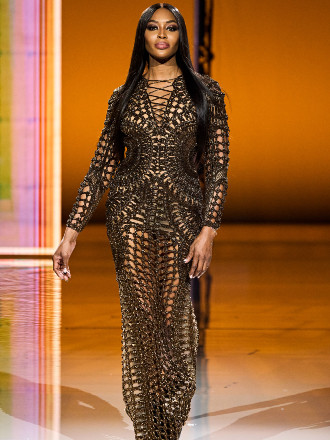 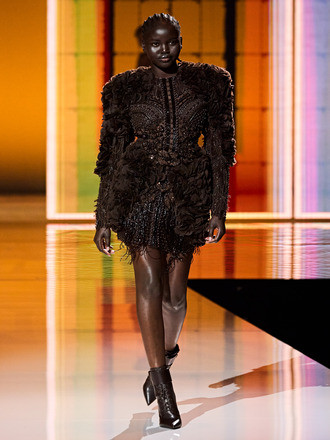 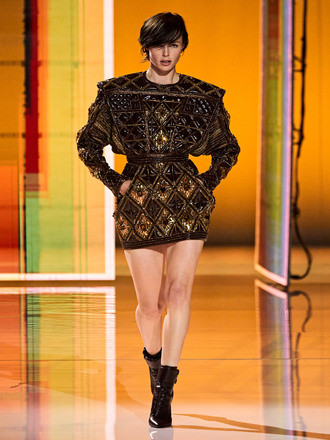 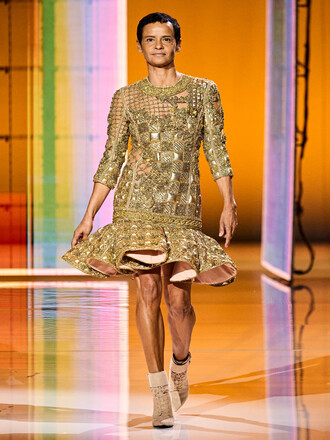 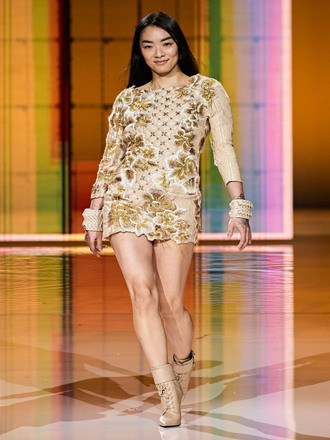 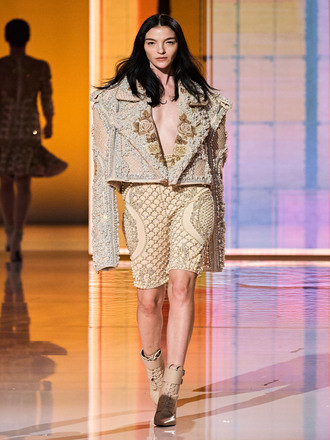 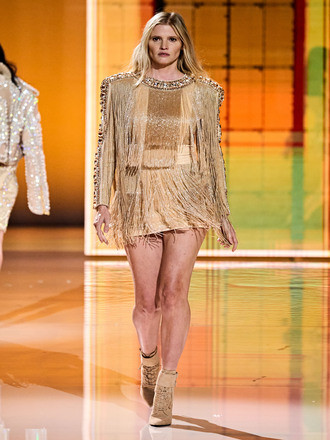 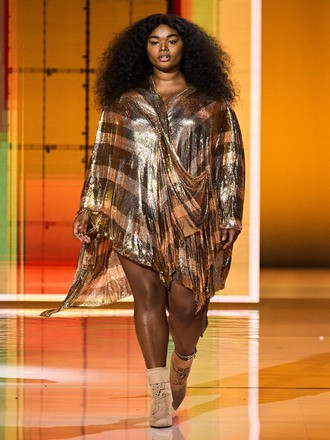 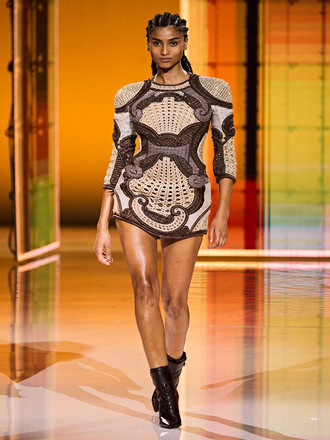 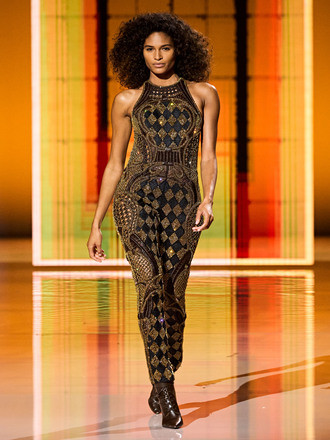 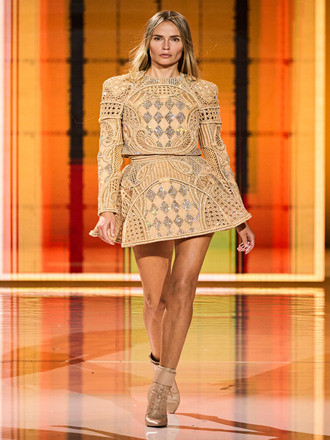 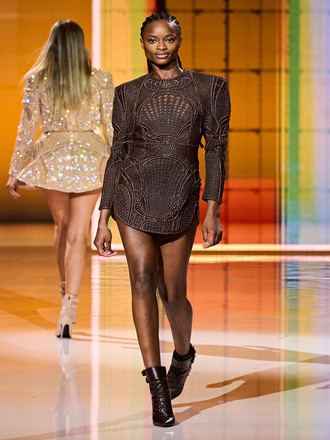 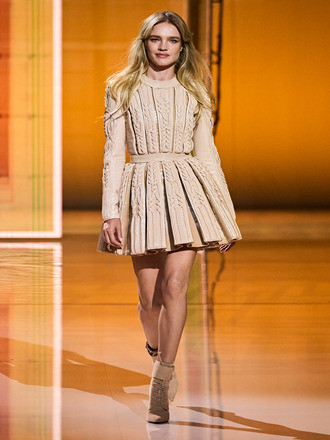 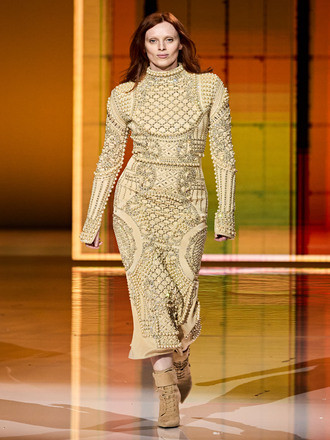 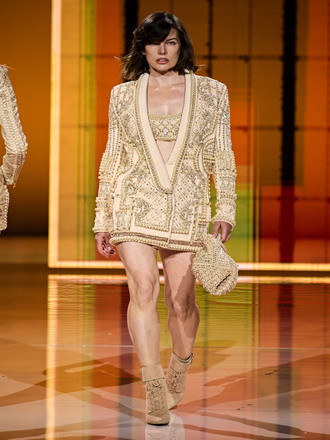 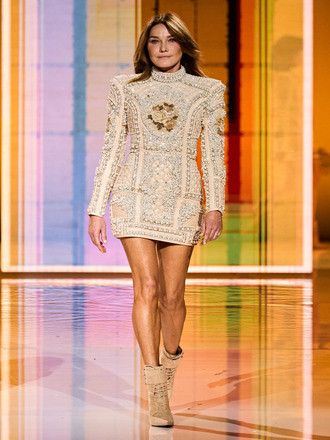 We’ve decided to celebrate those ten years of nonstop challenges, creations and changes with a re-edition of a handful of my favorite looks. I will admit that looking at them, all grouped together, brings me great joy, as at this moment, I can see that they are milestones of the journey that brought me to where we are now, in 2021.

Overlapping our celebration of this last decade with the Balmain Festival makes perfect sense. When the door opened for me in 2011, I was not the most expected candidate for a Creative Director. Since then, I have been determined to use this opportunity and position to keep pushing for further change. I’ve worked to ensure that Balmain’s presentations, workspaces and campaigns reflect the true diverse beauty of today’s world.
Over the next ten years, I pledge to continue to push for more inclusion, more democracy and more openness. Here’s to the next decade of sharing our joy-filled signature mix of fashion and music with more and more of those who wish to enter into the Balmain universe.

“By celebrating where we come from, we can clearly see where we are headed.” 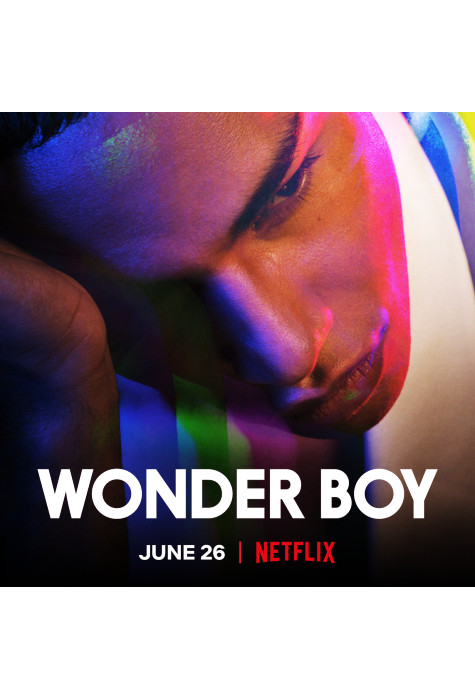 “By celebrating where we come from, we can clearly see where we are headed.” That line has always strongly resonated with Creative Director Olivier Rousteing. For the past decade, he has built upon the house of Balmain’s legacy while pulling from his own extraordinary personal journey. A journey now chronicled in the up-close-and-personal documentary “Wonder Boy”. Directed and produced by Anissa Bonnefont, “Wonder Boy” is now available for streaming worldwide on Netflix.

Just twenty-five years old when he was named Creative Director in 2011, Olivier Rousteing has successfully grafted an immediately recognizable style upon Balmain. While relying on the house’s rich archives for inspiration and fully utilizing the atelier’s impressive mastery of intricate, traditional couture techniques, Rousteing has also managed to impose a singular silhouette and contemporary outlook that reflect the way that members of the “Balmain Army”—the young men and women of the designer’s own generation—live their lives. Season after season, runways highlight both the exciting, inclusive diversity of the modern Balmain universe and the importance of 21st-Century culture—in particular, today’s music—in that universe. 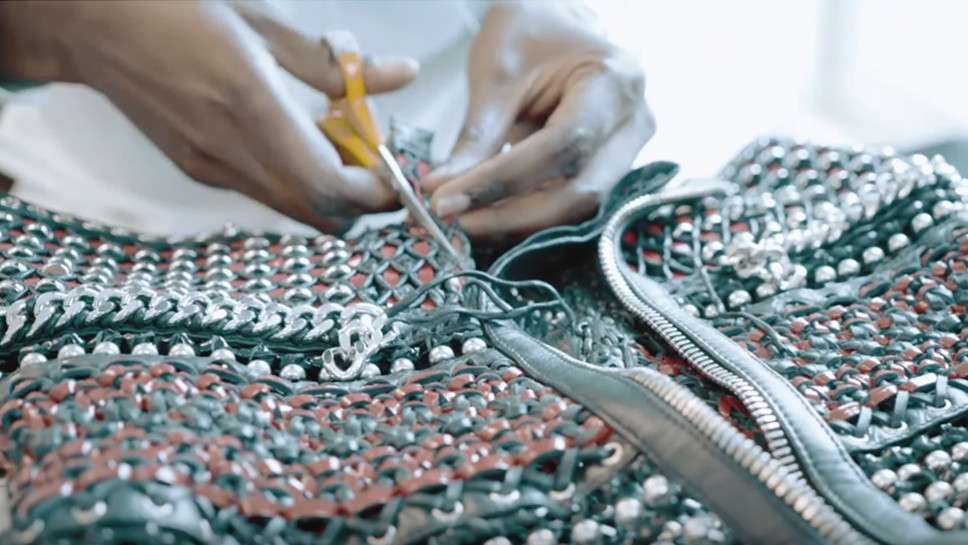 Balmain’s singularly rich couture history is celebrated in each of Olivier Rousteing’s collections. The house’s archives, filled with impressive designs, inspire, while its atelier, with its mastery of intricate couture techniques, continues to awe. As Rousteing notes, with this richness comes a daunting responsibility: he can never forget that he forms part of one long history; he must always meet the incredibly high standards established by those who came before him.

Olivier Rousteing is often amused by social-media comments commending him for his accent-free French. Perhaps because Balmain so strongly emphasizes the beauty of a diverse world, open to all global influences, people might overlook Rousteing’s own French roots—but the designer is happy to remind journalists of his pride in his country’s singular design, political and cultural advancements. In particular, Rousteing’s collections and campaigns often highlight a love for his hometown, Paris, and its great beauty and unique style.

Music is an integral element of Balmain’s singular style. As Olivier Rousteing explains, “for me, it’s impossible to separate fashion from music. That’s just how my generation grew up—we cannot conceive of one without a full helping of the other.” Balmain’s offerings are always closely linked to music—its melodies inspire Rousteing, its beats push him forward at each step of the creative process, its messages often become key component of collections and Rousteing’s favorite artists are often the focus of campaigns.

When Olivier Rousteing first heard Kanye West’s hauntingly beautiful Wolves, he knew he had to use it for his campaign. Kanye was quickly on board with the idea. They teamed up with Steven Klein and a contingent of Balmain Army members, spending two days on a truly creative collaboration—mixing dance, music, lyrics, photography and fashion in a new way that reflected the unique, inclusive and modern aspects of today’s Balmain.

Balmain is a fashion pioneer in establishing new ways to directly communicate with its followers and customers. One very popular pathway has been via social media. As Olivier Rousteing has explained multiple times, reaching out to his Balmain Army digitally offers him a new manner to converse honestly and immediately to those who are interested in knowing more about Balmain, the collections and Rousteing himself—removing any need for filters or middlemen. Balmain’s new entertainment-based communication strategy, Wonderlabs, builds upon this successful communication strategy. 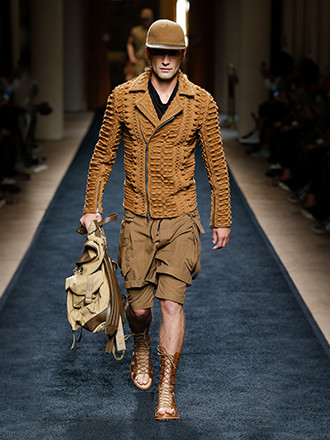 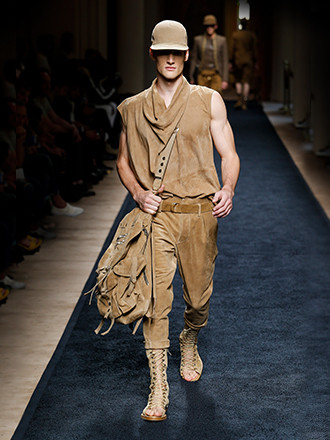 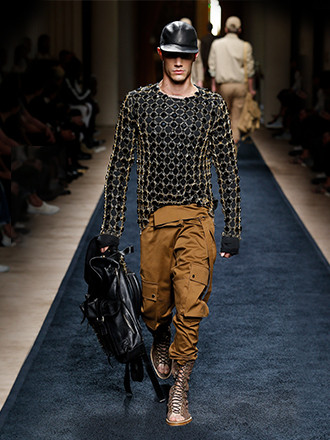 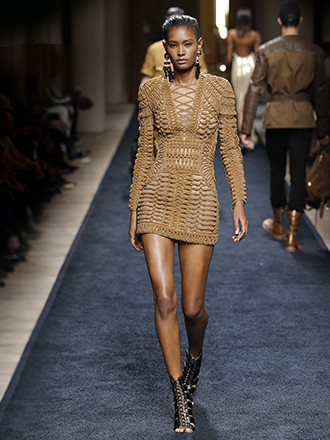 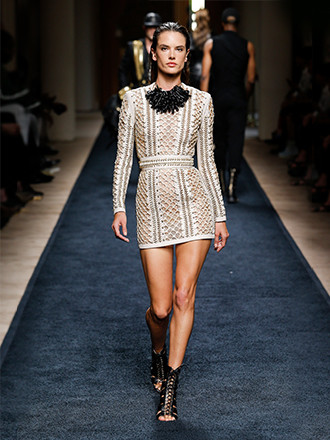 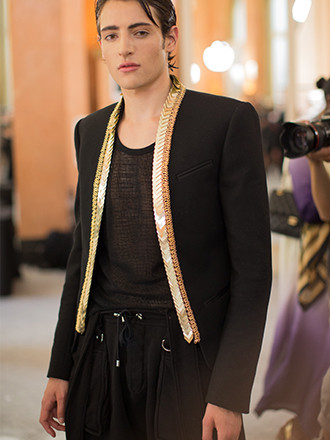 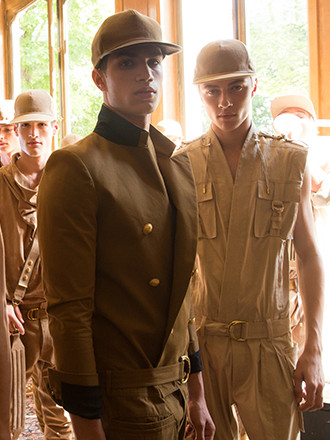 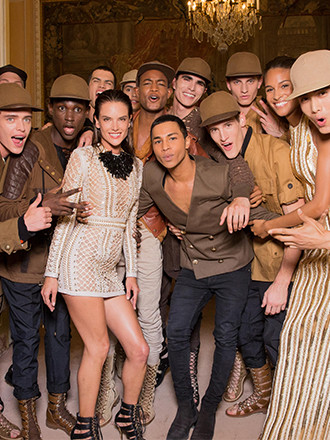 While designing Balmain’s first men’s runway collection, Olivier Rousteing was excited by the many future possibilities—so, it seemed only natural that the collection look to the great explorers of the early 20th century for inspiration: ""Those scientists and aristocrats were so unlike the imperialists that had come before them. Instead of glory, conquest and territories, these were men who were seeking new understandings and experiences. Above all, they were thrilled by the many as-yet-unknowns that lay ahead. During their epic journeys, these men notably melded the styles of distinct cultures to create a truly adaptive wardrobe—so, just as they did, my collection relied on a host of influences. 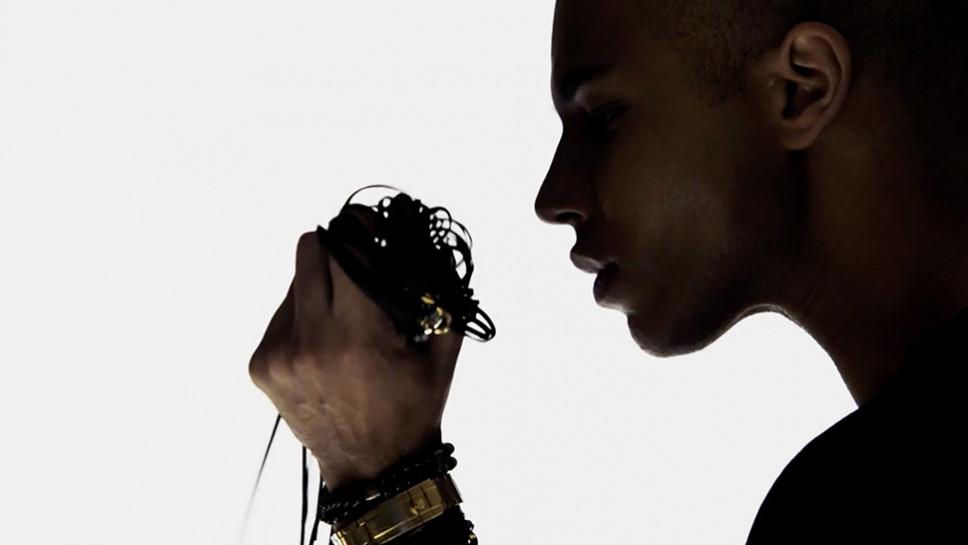 THE RE-LAUNCH OF BALMAIN'S ACCESSORIES

As Olivier Rousteing and his team worked on the rebirth of Balmain’s accessory collection, they trained their focus on three distinct sources of inspiration: the house’s singular history and rich archives, the Balmain atelier’s continuing mastery of traditional couture techniques, and the new, immediately recognizable style that Rousteing had given to the house. The result is a truly Balmain collection, relying on nothing but the finest materials, craftsmen and design for each of its distinct lines.

This campaign relies on images that Olivier Rousteing captured while spending two long days and one never-ending night, wandering across the city that so inspires him. Beginning at 44, rue François Premier—Balmain’s historic home—and trekking from arrondissement to arrondissement, Rousteing photographed his diverse and strong Balmain Army as they passed some of the most iconic addresses of the Ville Lumière

While shooting this campaign, Olivier Rousteing had to smile, thinking of how his adolescent self would have reacted if someone could have traveled back in time to tell him that one day he would be in a New York studio, watching Steven Klein shoot Cindy, Claudia and Naomi for his campaign. “When I was a kid in Bordeaux, it was their editorials that first made clear to me the amazing transformative power of fashion,” he noted. The lighting was clean and direct, and the four icons were posed front and center, since it was obvious that there was no need for any special installation or any lighting tricks. The unique combination of Balmain’s Spring 2016 designs and those powerful women was more than enough.

"FASHION IS A REVOLUTION NOT AN EVOLUTION"