"The Harder They Fall" Capsule Collection

When Netflix asked Olivier Rousteing to collaborate on a few pieces for their uniquely compelling and modern Western “The Harder They Fall” – alongside the film’s Costume Director Antoinette Messam, the Creative Director was thrilled. So much so that he and his team at the Balmain atelier decided to create a limited-edition collection melding the film’s bold spirit and look with the expected finesse of a Balmain runway.

Indeed, in France, they grew up with the same list-topping tunes, videos, series, films and books that in America. And just as all those blockbusters and best-sellers have moved and inspired countless Americans, they have had that same effect on this side of the Atlantic, as well—for example, more than a few of Balmain’s runways have referenced some of America’s most iconic creators and creations. So, just like everyone else, everywhere else, Olivier Rousteing spent a lot of his childhood watching American Westerns.

Those southwest american locations might have been far from southwest france, where olivier rousteing grew up - but the greatest westerns tell stories that are not limited to a time or place. 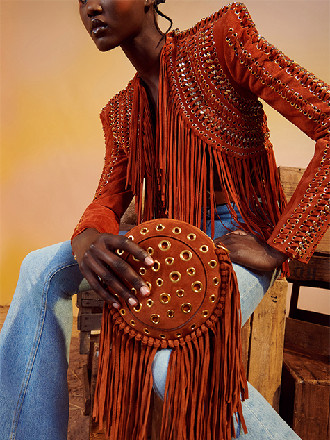 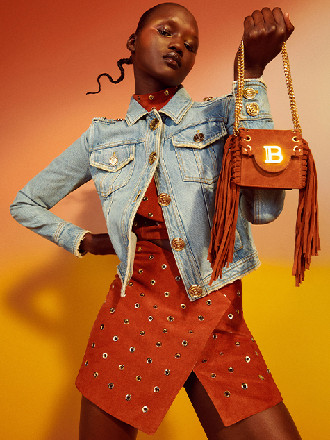 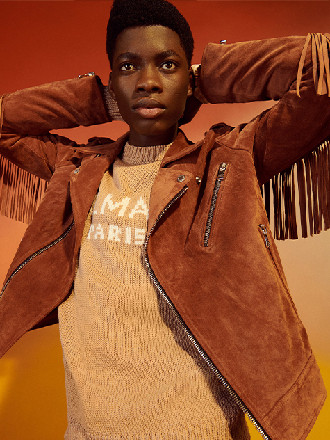 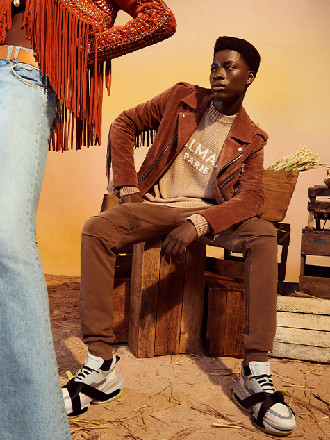 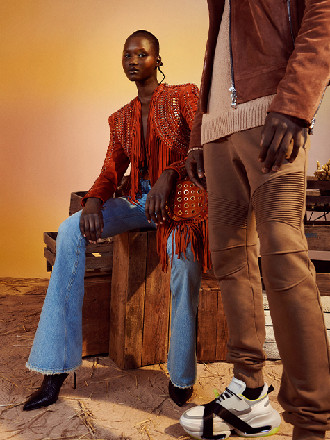 Universal, yes, but at the same time, many of those famous movies were tragically limited by
narrow-minded prejudices of the time. It wasn’t until Olivier Rousteing was an adult that he learned that the
Westerns of his youth projected images that were often far from the reality of the 19th-
Century West. Those films, with their all-white casts, ignored an incredible history, where one
third of American cowboys were black—many of them newly freed slaves who had headed
west in hopes of a better life.

The film «The Harder They Fall» – featuring a star-studded cast and the type of soundtrack you’d expect from a Jay-Z production – offers a renewed view of the genre with an embrace of historical truths and modern film-making.

ABOUT THE HARDER THEY FALL

When outlaw Nat Love (Jonathan Majors) discovers that his enemy Rufus Buck (Idris Elba) is being released from prison he rounds up his gang to track Rufus down and seek revenge. Those riding with him in this assured, righteously new school Western include his former love Stagecoach Mary (Zazie Beetz), his right and left hand men — hot-tempered Bill Pickett (Edi Gathegi) and fast drawing Jim Beckwourth (R.J. Cyler—and a surprising adversary-turnedally. Rufus Buck has his own fearsome crew, including “Treacherous” Trudy Smith (Regina King) and Cherokee Bill (LaKeith Stanfield), and they are not a group that knows how to lose.

THE HARDER THEY FALL will be in select theaters on October 22 and on Netflix November 3.