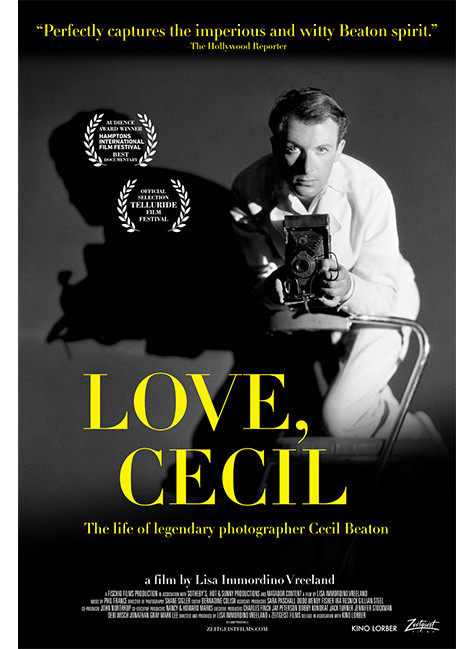 For this episode, we head back to that same front row of that first Balmain show. For, seated next to Alice B Toklas and Gertrude Stein was their good friend, Cecil Beaton.

Beaton, after being presented with Pierre Balmain’s fresh new silhouettes—what Alice Toklas defined as a “New French Style,” —immediately began spreading the news about Pierre Balmain. He made sure that all of his society friends heard the news first from him—that Paris had a new young fashion talent that they needed to be aware of.

To learn more about Cecil Beaton, we turned to author and film director Lisa Immordino Vreeland.

Immordino Vreeland has been immersed in the world of fashion, art and culture for the past 25 years. Her first book was accompanied by her directorial debut of the documentary of the same name, Diana Vreeland: The Eye Has to Travel (2012). The film had its European premiere at the Venice Film Festival and its North American premiere at the Telluride Film Festival. It went on to win the Silver Hugo at the Chicago Film Festival and the fashion category for the Design of the Year Awards—otherwise known as “The Oscars” of design—at the Design Museum in London. Her second film, Peggy Guggenheim: Art Addict premiered at the Tribeca Film Festival (2015) and had its European premiere at Art Basel. Her second book, Love, Cecil came out in October 2017 to accompany the film Love, Cecil that premiered at the Telluride Film Festival in 2017. Immordino Vreeland curated and directed the award-winning short film series called Art of Style, for the digital fashion network, Made to Measure. The films explored the creative expression of innovative designers and captured their strategy of style. She continues to create work for collectors, galleries, and museums. Her fourth film, Truman & Tennessee: An Intimate Conversation was accepted at the 2020 Telluride Film Festival and will be playing festivals worldwide throughout 2021. The film currently is the winner of Best Documentary Feature at the Santa Fe Independent Film Festival and winner of Best LGBTQ Film at the Key West Film Festival.

Cecil Beaton had a long relationship with a new and important force in Paris’ emerging post-war social scene. Lady Diana Cooper, the aristocratic wife of the new British ambassador Duff Cooper. Beaton had adored Cooper ever since he passed her on the street in London in the ‘20s.

Duff and Diana Cooper were at the center of a new hot spot for artists, designers and socialites in Paris—the British Embassy’s Salon Vert.

In her youth, Diana Cooper was known as “the most beautiful girl in the world.” She was a popular actress, and she is said to have inspired characters in at least half a dozen novels, by authors such as Evelyn Waugh and Nancy Mitford.
The press of the time loved her, seeing her not only as a great beauty but also an amazing style arbitrator, known for her incredible distinct manner of dressing.
She loved to flirt with all the rich boys of her generation—she was part of a pre-war group of well-connected young Brits known as the Coterie —and all the boys in the Coterie seem to have written dozens of letters proclaiming their undying love for her.

As we’ve seen, thanks to well-connected fans of his new house like Diana Cooper, Susan Alsop and Cecil Beaton, Pierre Balmain was able to move on from the success of his first presentation to quickly dressing the powerful tastemakers of his day. The war had changed things, of course, but at that moment, old-families, old-money and society still wielded a whole lot of power.

Today’s Balmain, under Olivier Rousteing continues to reference and riff on the incredible beauty of Pierre Balmain’s earliest fresh new creations that so excited that society of the time—but Rousteing also cleverly appropriates society’s codes and signatures for a new modern vision of luxury that speaks to our age — and the young, diverse and inclusive Balmain Army that Olivier Rousteing designs for today.

it was Rousteing’s Balmain Fall 2020 collection when he made this new vision most clear. For that runway, he decided to appropriate for himself all those symbols of the refined upper-class that had once excluded him—signature styles of the upper class, like silk-scarf patterns, Vichy prints, rich cashmeres and riding outfits…

And for that 2020 collection, he twisted them completely, playing with the mixes, proportions, placements and silhouettes—finally ending up somehow subverting all of those society codes into something that becomes fresh and modern on the runway.

His goal was to take control of what had been the old symbols of exclusion—and to refashion them for his inclusive and young Balmain runway—he took all those rarified icons that once only signified a closed-off world of wealthy old families and made them very right for a collection that hailed the open doors and open minds of today.

Jean Reinhardt—known to all by his Romani nickname Django—was France’s first major jazz artist—and, for many critics, he is Europe’s greatest jazz artist, ever. Two of his hits bookend the years of France’s occupation. The first, “Nuages” (Clouds), is one of his most famous compositions. Written after France’s defeat in 1940, it became for many a sort of unofficial Parisian anthem, signifying hopes for eventual freedom and liberation. Reinhardt, unlike many Romani, somehow managed to avoid the Nazi camps—even after his plans to escape to Switzerland were thwarted by the Nazis, he was still able to return to Paris and continue playing. Most Romani, of course, were not so connected and lucky. It’s estimated that over 600,000 Romani people were interned and killed during the Porajmos (the Nazi genocide of Romani people). So, we can easily understand why he marked the Liberation with this now iconic, celebratory and joyful jazz version of La Marseillaise, France’s national anthem. At that same time, remembering the great losses, he composed a moving requiem mass for the victims of the Romani genocide, entitled “Requiem à mes frères tsiganes.”